In 1954, a psychologist named Frederic Wertham published the most influential book ever written about comics: Seduction of the Innocent, a polemic that decried comics as a moral evil that caused everything from juvenile delinquency to sexual perversion. The result of Wertham’s book was a series of congressional hearings and finally the creation of the Comics Code Authority, the comic-book equivalent of the Motion Picture Production Code. The CCA destroyed EC comics, the only company doing anything remotely adult in the comics field, and insured that comic books were strictly assembly-line pablum until at at least the late 60’s.

The funny thing is that unlike the paranoid delusions of most moral guardians, Wertham was at least partially right. Comic books are filled top to bottom with kink. Wertham said then that the relationship between Batman and Robin was obviously homosexual; nowadays, anyone who’s not sailing down Denial at full steam has to admit how fully fucking obvious the homo energy is between Bruce Wayne and his young, handsome ward, “Dick.” And then there’s Wonder Woman and that lasso of hers. Her pervy lineage is so easy to follow that her comics might as well have been produced by Irving Klaw.

William Marston, who invented both Wonder Woman and the polygraph machine, conceived of her as a role model to show girls the power they had in their inherent feminity and “domination through submission.” All the early issues of Wonder Woman are filled with scenes of bondage, submission, wrestling, and spanking that should have made Wertham’s head spin, if he hadn’t been so busy being offended at her uppity nature.

In short, comic books always have been and always will be everything that my mother ever feared they were: mind-wasting tracts that map the shortest route to damnation and perversion. When they try to be anything else, they wind up looking even weirder, like a drag queen who just hasn’t watched enough Judy Garland movies to be clear on the concept. Take a look at any of the Spire Christian comics from the sixties and seventies; at their best, they’re just sad and awkward attempts to talk to the kids. At their worst, they’re gut-bustingly funny. It’s hard even to be offended by their attempts to make wimmen assume the position (tits up, legs open) and to get kids to be obedient little soldiers of Christ.

Below is one of my favorite discoveries of comic-book smut so far, from Ape-Law.com. There are so many adolescent daydreams in this one page, I can’t even count them. Why did I ever need to steal Playboy? 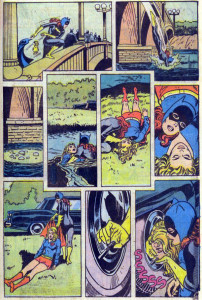