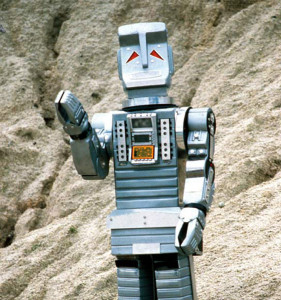 Marvin, as depicted in the BBC television series.

I spend a lot of my time feeling depressed. Not just sad, but paralyzingly, screamingly depressed. I’m the kind of person who thinks that Kurt Cobain was just too fucking perky.

This is not a new thing. The last few years may kicked it into overdrive due to the turbulence of my personal life, but I’ve been here before and I’ll no doubt be here again. This has been my life since my early adolescence. It’s really hard to know how to talk about depression, partly because it’s really fucking taboo to be depressed. Show it too much, and you get the label of being self-pitying or full of “drama,” and people do a quick 180 the minute you enter the room.

Everything needs some form of measurement; just saying “I’m depressed” doesn’t say anything. That could mean anything from “I’m sad because my goldfish died,” to “I’d dearly love to blow my fucking brains out.” Therefore, I’ve devised a unit of depression: The Marvin. If you know your Douglas Adams, you should get the reference at once: Marvin, the Paranoid Android, from Adams’s cult novel The Hitchhiker’s Guide to the Galaxy and its assorted sequels. But although most people know Adams’s work from the books, Hitchhiker’s Guide started out as a radio series on the BBC, and it’s the portrayal of Marvin by Steven Moore in that series that makes him the perfect index for my depression. Besides the relentless sense of futility and despair in the character himself, the voice is so absolutely spot-on, pitch-perfect that it’s like a kind of emotional onomatopoeia for what’s going on in my head. The dominant trait is not sadness, but an indomitable sense of weariness, as though just assembling the words in his head, never mind speaking them, is a huge burden for Marvin.

And then there’s the fact that Marvin is a robot. The whole joke comes from the seeming incongruity of a robot being so humanized that he’s constantly depressed. In fact, all Adams did was flip one of science fiction’s most annoying clichés—the cute robot companion—on its head. For some reason, we’re perfectly willing to accept R2D2 or Twiki, but an artificial intelligence with a deep sense of futility seems absurd. Thanks to the BBC Radiophonics Workshop, the weariness is layered with an electronic drone and a slow, deep echo, as if Marvin is speaking from the bottom of a large, deep, water pail.

The marvin is a negative measurement. In an ideal world, you would be living at 0 marvins, perhaps even negative marvins. I don’t see that happening. Depression has been part of my brain for so long that I can barely even imagine it not being there. It’s become the foundation and the skeleton that I’ve built all my other thoughts and experiences around. 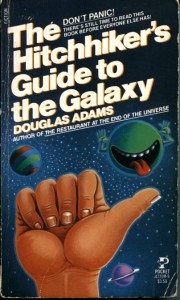 Marvin the character is kind of like the platonic ideal of depression, so if you’ve reached a full marvin, that’s a really bad day. Those are the days when I can barely move, because the depression is just bearing down on me so badly. And in a way, the inability to take any positive action is a good thing. On some really bad days, I’ve said that I feel like my depression is the only thing that’s keeping me alive. I say it with a certain wry humor, but it’s not really a joke. On those days, I might run mental film clips of swallowing the business end of a 9mm or slitting my wrists, but if the gun was sitting fully loaded on a table six feet away, it would be a massive effort on my part to walk across the room and pick it up. Dorothy Parker described it perfectly in her poem, “Résumé”:

Razors pain you;
Rivers are damp;
Acids stain you;
And drugs cause cramp.
Guns aren’t lawful;
Nooses give;
Gas smells awful;
You might as well live.

People kind of freak out when you start describing visualizations of suicide, so let me say this: I don’t think that I’m realistically at any risk of suicide. I’ve been running these scenarios through my head since I was at least in high school, if not before. If I was going to pull the plug, I’d have done it long ago. The last two years or so of college (ca. 1995-1997) stick out in my mind as a time when I was at or near a full marvin for extended periods of time.

Using Marvin the Paranoid Android as a reference point for how fucked-up I am on any given day seems kind of silly on the face of it, possibly even trivial. Like the best jokes, though, there’s a serious point to it. One of the most frustrating things about depression is how difficult it is to talk about. Not in the emotional sense, although that’s part of it, too; it’s that we don’t have the language for it. As I said before, “depression” is a very vague, amorphous word that covers everything from dead goldfish to sad movies to a clinical analysis. Saying that “I’m depressed” doesn’t mean anything.

Even worse, the actuality of depression contradicts every idea of how we think that our emotions are supposed to behave. One of the biggest obstacles for me is that when I tell someone I’m depressed, their first response is “Why?”

It’s a natural question. I’d respond the same way. For that matter, I do respond the same way. That’s the first question that I ask myself when I start feeling shitty. I go through rigid analysis, counting off the things in my life as if I were working out an algebraic equation. And no matter how many variables I enter, or how I calculate them, there’s no way to make them equal the paralyzing self-loathing that drags me down on a regular basis.

And the fact that I can’t find a reason for it just makes it worse. Being sad because you got fired or because your dog got run over by a car? That makes perfect sense. It’s a perfectly natural human reaction.

But when there isn’t any tangible, direct cause—and when, in fact, all my material needs are taken care of and I’m surrounded by people who love me and want me to be happy—then I just feel like an asshole and an emotional parasite.

The marvin is a first step towards a vocabulary about depression. It’s not only a small piece of gallows humor that acts as a mild anesthetic, but it provides a rudimentary scale that describes just how fucked up I am, without expressing a reason or cause. That comes later.

And the fact that the BBC got the voice so dead-on is absolutely essential to understanding why it works as a metric for me. There have been days when I feel like all my energy has been used up just by standing up without collapsing into a fetal position and screaming. Anything I do after that is just extra credit as far as I’m concerned.

The flat weariness every time Marvin introduces himself by saying “I think you ought to know I feel very depressed,” articulates perfectly what I’m feeling on those days. For some reason, Marvin’s portrayal of depression feels more real to me than the usual ways it’s shown in television or movies. Straight depictions of depression tend to feel hackneyed and melodramatic to me. I usually wind up just rolling my eyes in annoyance. But Marvin gets it right. I think that this is another example of something I’ve long believed: that truly horrible things can only be described honestly through humor. The works of anti-war literature that have most deeply affected me are invariably comedies, like Catch-22, Slaughterhouse-Five, or Duck Soup. War, like depression, doesn’t fit easily into the cause-effect logic of drama.

Measuring my depression via the marvin is really a small thing. It’s a private joke that’s also a rudimentary tool. But measuring it also gives it shape and form, instead of allowing it to continue being an amorphous fog that leeches into everything. It’s a small step, but it’s a step.