I have a new piece up at Slixa, about the fight to ban New York police and district attorneys from using condoms to arrest people for prostitution. 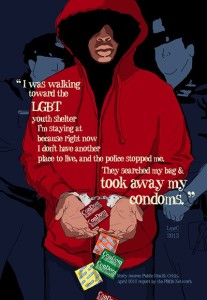 “I was walking towards the LGBT youth center I’m staying at because right now I don’t have another place to live, and the police stopped me. They searched my bag & took away my condoms.”
Art by Lauren McCubbin

In light of the decision yesterday that stop-and-frisk is unconstitutional, my piece seems to be especially well-timed. “Condoms as evidence” is little more than a sub-category of stop and frisk that’s used to target the people who need safer sex resources the most. The fact that it’s been allowed to exist as long as it has is due to the fact that over the last couple of decades, it’s become more and more acceptable to criminalize whole populations of people, instead of behavior that actually does harm.

But in the eyes of district attorneys and police departments, condoms aren’t for everyone. For white, middle-class, straight-looking people, a few condoms in their pocket or purse represents a sophisticated, responsible sexuality. For those who fit police profiles of sex workers, having condoms on their person might be the thing that gets them arrested on prostitution charges.

The people who fit law enforcement profiles of sex workers are overwhelmingly young, low-income, people of color, or visibly queer or transgender. In other words, arrests target precisely those populations most at risk for transmission of HIV and other STIs.

This seems like a particularly cruel joke in New York, the only major American city to issue its own official condoms. Since 2007, the city’s much-acclaimed “NYC Condoms” program has distributed tens of millions of male and female condoms per month to the five boroughs. In 2012, the city distributed 37.2 million condoms — about 70 per minute. This February, NYU commemorated the program’s five-year anniversary with a retrospective of graphic design and public relations material.

But even as New York’s elite celebrate the condom as a pop icon, thousands of residents are faced with a dilemma: carry condoms to protect themselves against STIs, or risk harassment or arrest by police. “These are the populations that the CDC and other public health authorities have targeted for universal condom access,” says Megan McLemore, a Senior Researcher for Human Rights Watch. “They’re really trying to make sure that these populations use condoms every time. So the fact that people who are doing this work and who are profiled as doing this work are carrying fewer condoms than they need has serious consequences for HIV prevention.”