Wow.  This is what the Christian Right reads to their children at night, apparently, to make sure that they don’t turn out to be queer.  Right here we have the entire text of a darling little book called Alfie’s Home, which explains how, thanks to an emotionally distant father, a mom who’s too emotionally close, and a pedophile uncle, Alfie starts to think that he might be a homo.  Fortunately, there’s a wise and compassionate psychologist who hasn’t fallen prey to the homosexual conspiracy who can explain it all to him.  All Alfie really needs is some male bonding time with his dad, and probably a hooker or two, to make him happily heterosexual. 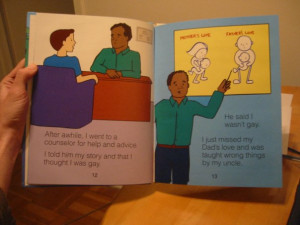 One of the weirdest aspects of Alfie’s Home—and we’re talking a whole lotta weird, here — is how it pathologizes motherly love and affection. When Mommy holds Alfie, telling him about her problems, “It makes me feel uncomfortable and strange.”  In a sense, Alfie’s “problem” arises from his father not being enough of a man—and his mother being too much of a woman.  Plus, there’s the picture of Uncle Pete cuddling up to Alfie 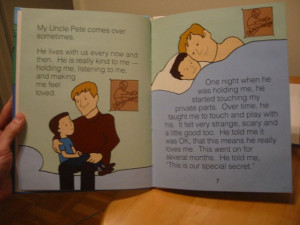