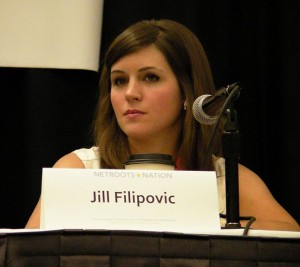 As many pointed out, Pahman’s broad use of “feminists” in this context amounted to a thinly-veiled euphemism for sex workers themselves, since nearly all sex worker activists and organizations advocate for decriminalization. Blogger Feminist Whore summed the problem up in a Tweet: “I love how pieces like this silence pro-decrim sex workers by framing the opposition as only being other ‘feminists.'”

I love how pieces like this silence pro-decrim sex workers by framing the opposition as only being other 'feminists' http://t.co/iBtCde33UK

If Feministe‘s original decision to run Pahman’s essay was disturbing, deleting it without any acknowledgement or apology was even worse, and shows how deeply institutionalized their problems with sex work are. There is no doubt that the decision to publish was an act of contempt for sex work communities. Assuming that the workers couldn’t speak for themselves, Feministe prioritized the voice of a privileged, inexperienced non-sex worker. And then, when they faced criticism and anger from their regular readership and sex work communities, they flushed the whole thing.

As I said in my first piece, I do have some sympathy for Jill Filipovic and her colleagues. You write and speak in public long enough, and it’s inevitable that you’re going to fuck up. Sometimes the pressure of deadlines and trying to balance scores of competing viewpoints can screw up your decision-making. The true test of character is how you handle it when people point out that you’ve fucked up.

There were 204 comments on “Dear Feminists” before Feministe closed the thread on September 13, about a week after the original post. In addition to Kitty Stryker (whom I cited in my first piece) several other sex workers posted comments that were critical of Pahman and Feministe. With the post gone, so are their comments, and Jill Filipovic doesn’t need to respond to their criticisms — or, indeed, even acknowledge them.

I do have a cached version of the page as of September 18, after the comments had already been closed. Here are a few examples of what was said:

Yet another article on sex work written by a non-sex worker who can’t even be fucked to quote any of the sex workers whose minds she apparently knows so well. There’s not so much as a paraphrase of something actually said by a sex worker, or “prostituted woman” as she refers to them.

I don’t understand how someone can see that a criminal record and inability to go to the police over abuse is a problem and still not be in favor of decriminalization. In fact, she’s violently against decriminalization.

It would be really nice to not have to worry about being arrested for doing something that would be totally legal if it were free. I’m not a feminist, but I am a sex worker. Do you want to strangle me? Because Christ, that’s a nastier threat than I’ve ever gotten from a client.

Yo, Feministe. If you wanted an article about street work, there are a number of people far more qualified to write it than this person. Did you realize that there are actual current and former street-working sex workers who write about their experiences? I think their thoughts are much more relevant.

Also, I think it’s important to remember that sex workers don’t just have different experiences from each other, they can also personally have a wide variety of experiences of sex work. Many women who I’ve seen labelled as “privileged” sex workers (including personal friends) have had histories of extreme poverty and survival sex work.

Wow, I am aghast that Feministe posted a non-sex worker’s viewpoint on how sex work should be run. How about, instead of the perspective of a non-sex worker who rode along just voyeuristicly watching these women work, and jumped to her own conclusions on it, running a post written by a street sex worker in the sex workers’ rights movement, many of whom have drug histories and have worked under horrible conditions but would fight to the death to protect their right to make their own choices about their bodies, their right to the option of survival and street sex work?

That is the bottom line isn’t it Caty?

Sex workers are fighting for their right to use sex work to survive (as in “stay alive”).

“Rescuers” are fighting to get the right to control and define other people’s lives, up to and including denying them the right to survive by the only means available to them.

In 2006 maybe there was a way to reshuffle things a little and offer everyone a way to stay alive that did not involve selling sex…but nobody bothered to try (what WERE all these rescuers up to instead anyway?), and now 2006 is a long ago yesterday, and like every other yesterday it is gone for good.

Sex workers have the same right to survive as any human being.

Just what kind of monster wants to take that away anyway?

There is of course, much, much more, far too much for me to reproduce here. And that’s not even covering the things that were being said on Twitter or on other blogs.

To simply ignore all that anger, and even to pretend that it never existed, is reprehensible. If somebody matters to you, when you say something that pisses them off, you talk to them about why they’re angry, and what you can do to fix it. It’s only if you don’t give a shit that you turn your back and walk away. That’s exactly what Feministe has done here. It is a massive failure in courage and integrity from one of the Internet’s major forums on gender and social justice.

If Feministe has any aspiration at all of living up to their claims of being advocates for social justice, they have to take a good hard look at themselves, far beyond the problems with this one post. It includes acknowledging that they have not only systematically ignored sex workers, but created an environment that’s actively hostile to them. There are huge numbers of sex work activists who refuse to identify as feminists because of bullshit like this. If Jill actually wants to center sex worker voices, she needs to give them a reason to believe that she and the Feministe staff have their backs. Right now, it looks like she just wants them to disappear, cleanly and completely.

When I write or speak up about sex work — especially in sex worker spaces like Slixa — I think of it like being a dinner guest in someone’s home. That means that I behave myself the best I can: wash up, put on my best clothes, don’t swear in front of the kids, act according to their rules, and stay in the parts of the house that are open to guests. Even though I’m an atheist and prayer makes me squirm, I’ll even go through the motions of participating in the religious blessing before dinner.

And I think that’s what separates me from Jill Filipovic, Tigtog (the editor who approved “Dear Feminists”), and Sarah Elizabeth Pahman. They don’t seem to even realize that they’re sitting in someone else’s living room, never mind that they’ve insulted our hosts. What Feministe did is like pissing on your host’s carpet, then storming out indignantly when they point out that you just pissed on the carpet.