In her post Lifestyle Choices, orchidea painted a disturbing triptych of three images: a roommate, her daughter and that which she “will never become inured to.” The first image was the memory of a roommate, a girl who stood 5 feet 9 inches tall and weighed 88 pounds: “a cushion of bones held together by flaps of skin.” The center panel is her daughter, healthy and beautiful, fortunate to have a mother who celebrates her child’s beauty. The third panel is blank, reserved for the images that orchidea wishes did not exist. Images that she hopes will not harm her daughter: young women, so thin that they no longer menstruate, who consider their quest for thinness a lifestyle choice.

One does not have to be anorexic and bulimic to abhor the sight and feel of soft flesh. The image of a naked body with generous thighs and rounded belly will cause uneasiness, if not distaste, as I learned when viewing the exhibition Earthly Bodies: Irving Penn’s Nudes, 1949-50. Unlike the svelte models he photographed for the covers of Vogue, these photographs portray the bodies of what Penn called “real women in real circumstances.” A few photographs featured the taut stomach framed by pelvic bones which we have come to accept as a standard of beauty. But the visitors did not crowd together to study these “standard” nudes. Half circles formed in front of photographs of women who were sculptures of full breasts, rounded bellies, and undieted thighs. The flesh of these women rested in folds, soft and vulnerable, on planes of black velvet. 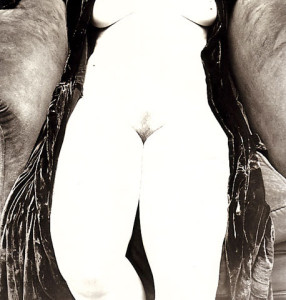 One of Irving Penn’s Nudes

Penn was reputed to be a master of the chemical process, using overexposure and bleaching to reveal the hidden image. In a series of four phtographs, the model has been photographed while reclining on an upholstered chair, with an expanse of black velvet framing her torso. As I studied these pictures, I felt as though I was a midwife keeping watch in the middle of the night as a moonlit river gave birth to a goddess. Most of the viewers near me were silent, perhaps even reverent.

Most, but not all. As I studied the photographs, voices emerged from the viewers surrounding me: “Weird, huh?” “Oh my god”. “This is just too gross.” In another exhibition room, a young woman rushed past me towards the exit, announcing as she left: “I can’t stand to look at this anymore!”

When Penn submitted these photographs for a symposium of modern photography to be judged by the venerable Edward Steichen, the older man put his arm around Penn’s shoulders and said, “Forget the big nudes.” For the sake of orchidea’s daughter and all daughters, I am grateful that Penn chose to ignore the advice of old men.

Ex Animo: Thank you, Chris, for your words and the chance to place my own beside them. Thank you, generous Magdelena, for your encouragement and the link that led me to Chris.