Which brings me to Kink.com.

I may be a little prejudiced in favor of Kink. I’ve been to a lot of fantastic parties at the Upper Floor, hosted by Madison Young and Femina Potens. The Upper Floor is without a doubt one of the most elegant and beautifully decorated play spaces that I’ve ever seen, in San Francisco or elsewhere. Also, I interviewed several members of their staff and wrote a long feature about how they create their sites. I am, in short, pretty friendly with the people at Kink on a personal level as well as just liking the smut that they produce. 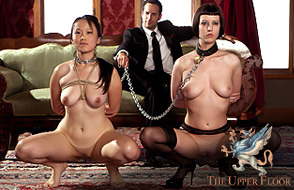 When I wrote my article about Kink.com for the now-defunct CarnalNation, I got to see that enthusiasm up close when Eric Gibb and the design department helped director Maitresse Madeline redesign Whipped Ass, the site that she was taking over at the time. They talked a lot about the “user experience” of the site, and went into some very involved, very sophisticated discussion about how the design of the site should affect the people who visited it. If there were more of that level of thought in porn, we might not have assholes like Morality in Media pushing their annual anti-porn week. Or maybe we would, but fewer people would treat them seriously.