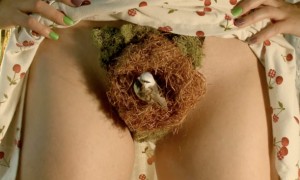 When we hit this part of the lyrics, though, I cringe:

Soft and sweet and shaped like a triangle
Some girls want no shape and they shave it all
That’s so whack, it hurts with the stubble
Walking ’round and look like an eight-year-old

This is one of the oldest canards about genital shaving there is, and it leaves a foul taste in my mouth. When shaving first started to become common, anti-sex activists grabbed on to the imaginary connection to pedophilia like a club. To like shaved pussy was to reveal your inner fetish for fucking little girls, these people claimed. It wasn’t even presented as an argument; it was more a self-evident truth that you should just know.

One of the things that immediately pisses me off about this assertion is that it’s ignorant. With or without hair, an adult vulva is different than that of a pre-adolescent girl. Heather Corinna, one of the true treasures of the internet, writes on Scarleteen about a few of the changes that happen to female genitals during adolescence:

A lot of people don’t realize that there are changes to the vulva during puberty. The labia and clitoris do expand some, and in addition, because of the rest of your body growing and changes in your body composition, the mons of the vulva tends to pull back, which can result in the inner labia looking bigger—and extending further outside the outer labia than they did in childhood—because more of them can be exposed than were previously with the lifting of the mons.

But there’s a broader issue here, beyond the simple facts about what genitals do when you grow up. The way we talk about sex is defined by shame, and switching one kind of shame for another gets us nowhere. Twenty years ago, women who shaved were shamed; now, women who don’t get shamed for being disgusting and gross. If all we can do is try to get back to the point where shaving is considered disgusting and gross, then we’ve accomplished absolutely nothing.

This is a conundrum that comes up again and again in discussions of beauty standards, as Shanna Katz points out in her own thoughts about “Map of Tasmania”:

How do we reclaim the sexiness of having hair as an option without stepping on shavers/waxers/etc? It’s the same as how can we run the fat positive movement without saying horrible things about skinny people? (some people are naturally a size two, and yet often times the FP movement talks about them as if they are bulimic or anorexic when they are not, or calls them skinny bitches, etc). To be truly sex positive, or the type of feminist I identify as, involves elevating global thinking WITHOUT HURTING others. When we step on people, say hurtful things, call them names, etc, solely in order to further our own thoughts about things, we set all of us back.

The shaved vs. unshaved issue seems to polarize people, and I feel like I’m one of the few who doesn’t have a specific preference; I love shaved and unshaved pussies, and I can guarantee that when I look at the latter, the last thing I’m thinking about is eight-year-old girls. I doubt that when I shave my balls and crotch, it makes me look like an eight-year-old boy. I hope not, anyway.

What I do love about pussies—about bodies—is their unrelenting uniqueness. It’s easy to forget how different each cock and each pussy can be, especially when our discussions about beauty and body image become so quickly polarized into clashes between two different varieties of shame. I want us to start to think more about that variety, instead of trying to making a new standard that everyone either has to live up to or feel ashamed. Amanda Palmer isn’t the first person to fall into this trap; we all do at one point or another.

No matter how much that single verse sticks in my craw, I think that Amanda Palmer is on the right track with “Map of Tasmania.” The video in particular makes the merkin (pubic wig) into a flamboyant, wonderful art form, with women proudly flashing merkins made of Christmas tree tinsel, flowers, playing cards,  dollar bills, and even a box of chocolates. It’s a celebration not only of pussy hair’s beauty, but of its variety. In Amanda Palmer’s video, no two merkins look alike, and it’s only a short jump from that to remembering that in real life, no two pussies look alike. I wish that she’d been bold enough to go all the way with it.