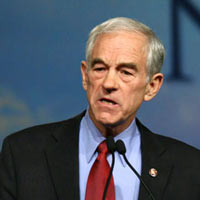 Amanda Marcotte puts her finger on a problem that seems to infect whiteboy hipsters across the country: Crank Disease, wherein you become convinced that a crabby conservative white guy with a racist past is going to be the savior of liberals and black people.

It’s worth pointing out at this point that supporting Ron Paul, even just a little, appears to infect the supporter with Crank’s Disease, where they’re making conspiratorial claims that we can’t assume that someone writing, “I, _____, am totally writing this,” actually wrote it. The longer you chew on that belief, the more likely you are to find yourself, a year from now, wearing camo and shooting up beer cans while complaining about a one world currency, which is of course, a totally different thing than your desire that the entire world trade in gold.

The Ron Paul variety of Crank Disease seems to turn clueless but otherwise benign whiteboys into vicious little pricks who lash out at any suggestion that he’s anything short of the Messiah. At the beginning of this month, I idly tweeted something about the racism in Ron Paul’s newsletters and immediately got a backlash from people who weren’t even following me. You would think I’d recommended a flash mob of disemboweling cats.

The desperation that drives liberals to believe in Ron Paul says a lot about the progressive movement over the last thirty years. Ron Paul’s popularity is based a lot on selling cherry-picked quotes to young white men for whom the importance of reproductive rights and the Civil Rights Act of 1964 are abstractions. But more importantly, just as the Republicans are so fucking desperate to nominate anyone who’s not a Mormon from Massachusetts that they’ll even give Santorum his fifteen minutes in the spotlight, progressives are desperate to believe in anyone who can lead them out of the wilderness, even if that person’s a conservative.

One of the fundamental problems with progressive movements since the Reagan Era is that we, the people, have let ourselves become convinced that we have no voice. All of the big left-wing pushes over the last few decades have been based around finding that Messiah, the one who will speak for us, the one who will lead us to the Promised Land. It has its roots in the misguided nostalgia for JFK and his so-called “Camelot”; many assassination theorists are driven by the fantasy that had Kennedy lived, we would have been spared the agony of Vietnam, that he would have saved us, despite his history of being a good and loyal Cold Warrior. It’s even present in the idolatry of Martin Luther King, which not only transforms the courageous organizing of thousands of people into passive, sheeplike following of a single man, but erases King’s own words and beliefs by reducing everything he ever said or thought into the Hallmark-like sentiments of “I Have a Dream.”

And holding those myths of Kennedy and King close to their heart, it seems that most progressives have moved from one Messiah to another: from Clinton to Nader to Dean to Edwards to Obama, the primary organizing principle in liberal and progressive circles since the horrible trauma of the Reagan Administrations has been that if we just get the right man into the Oval Office, everything will be all right. Once we find the Savior and swear Him in, we can put down our signs and go home.

I can understand the impulse; after eight years of George W. Bush, I would have been delighted to put a rotten turnip in the Oval Office as long as the ballot said (D) after Rotten Turnip. But it is a fundamentally authoritarian impulse that is treasonous to everything that progressives are supposed to believe in. As the Obama Administration has shown, having a Democrat in office means fuck-all if you don’t have people organizing at the grassroots level. Most of all, that’s what I love about the Occupy movement. Whatever its flaws, Occupy represents people rediscovering their voices and asserting that they have a democratic right to be heard, instead of waiting for one Messiah or the other to hand them their rights.

This is something I struggle with myself. Sometimes the idea of doing anything seems futile and overwhelming, and it’s easy to drown in a sense of helplessness. It seems so much easier to hope that someone will just do the right thing and make things better. The Occupiers have given me more hope than Obama ever did, because they’re not just reclaiming space, but vital principles of our democracy. They’re reclaiming the idea of acting as citizens, rather than just consumers.

And so, I really understand why people want to believe in Ron Paul. I understand it not just as a theory, but intimately, like your hand starts to understand the shape of a glove after wearing it for a long time.

More appropriately, I understand it like the wrist understands the razor blade. For a progressive to support Ron Paul is suicidal. Literally. Anatole France famously wrote that “The law, in its majestic equality, forbids the rich as well as the poor to sleep under bridges, to beg in the streets, and to steal bread.” That’s the freedom that Paul offers us: to die in the streets without health care or of a hemorrhaging uterus, or to live under different laws because of skin color. In New York Magazine, Jonathan Chait makes an excellent case that Paul’s racism and misogyny are in fact the systemic result of his libertarian beliefs instead of mere collateral damage. Libertarianism’s ideology favors those in power, Chait points out, because it doesn’t acknowledge any privilege not directly bestowed by the state:

The entire premise rests upon ignoring the social power that dominant social groups are able to wield outside of the channels of the state. Yet in the absence of government protection, white males, acting solely through their exercise of freedom of contract and association, have historically proven quite capable of erecting what any sane observer would recognize as actual impediments to the freedom of minorities and women.

The most fevered opponents of civil rights in the fifties and sixties — and, for that matter, the most fervent defenders of slavery a century before — also usually made their case in in process terms rather than racist ones. They stood for the rights of the individual, or the rights of the states, against the federal Goliath. I am sure Paul’s motives derive from ideological fervor rather than a conscious desire to oppress minorities. But the relationship between the abstract principles of his worldview and the ugly racism with which it has so frequently been expressed is hardly coincidental.

There’s no denying that some of Paul’s comments sound good if you’re starved to hear someone, anyone, point out the inherent injustice of the War on Drugs or the Iraq War. And so he sells well in an era when context and nuance gets lost in an era when debate is splintered into sound bites. In such an era, it’s easy for the media to turn him into a latter-day Chauncey Gardner whose words mean whatever you want them to mean. And it’s even easier to look past the reality of what the whole man stands for if you’ve been taught that liberation comes from Messiahs, and to think of racism and sexism as rather quaint relics of an earlier time. Sadly, both of these ideas are common currency, even in progressive circles. Support for Ron Paul is only the most recent manifestation of how prevalent they are.

The situation brings to mind another old quote, attributed (probably apocryphally) to Denis Diderot: “Men will only be free on the day that the last king is strangled with the entrails of the last priest.” If we want our lives and our country back, we have to do it without Messiahs, and remember the sound of our own voices.