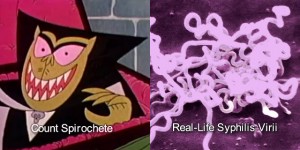 Campy vampire "syphilis" on the left; real syphilis on the right.

I have a real fascination with the history of sex. Because sex as a whole is kept so securely in the closet, its history is one of the most poorly-documented areas of our culture, and it’s easy—almost inevitable—for each generation to feel like they invented everything that’s not ten-up-ten-down heterosexual intercourse. Partly because it’s so well-hidden, the history of sex is especially revealing about who we were then and who we are now.

Below is a great example of the history of sex education called “The Return of Count Spirochete.” Despite its crude and colorful appearance, it wasn’t intended for children. According to the “Armed With Science” blog, “Count Spirochete” was produced in 1973 for the National Naval Medical Center to educate members of the U.S. Navy about the risks of syphilis and gonorrhea. It doesn’t look like a military educational film; what it resembles, more than anything, is an episode of “Schoolhouse Rock” dedicated to VD.

The film (about 20 minutes in length) opens at the Microbe Academy’s “Communicable Disease of the Year” Awards, where all the finest pathogens are gathered to see who’ll get the coveted “Fourth Horseman” award—kind of like an Oscar for pestilent disease. Nominees include smallpox, diptheria, tuberculosis, scarlet fever, and the common cold, but when the envelope is opened, the award goes to a dark horse: Count Spirochete, aka syphilis. The rest of the film involves the presenter, Death, giving a history of syphilis and explaining to the bitter losers why Count Spirochete deserves the award thanks to his exemplary work in infecting and killing millions of human beings throughout history. Death also gives props to gonorrhea as a close runner-up.

Jessica Palmer of Bioephemera sums up the look of the film brilliantly when she notes that their depiction of gonorrhea looks like “a lavender Tribble with a pitchfork.” Which not only sums up the weirdness of the film’s look, but the weirdness of its general philosophy: it tries to teach sexual health to a bunch of grown adults who could die in combat without actually depicting sex or genitalia. This particular weirdness isn’t unique to “Count Spirochete.” Even today, it’s the first thing you have to face as soon as you even propose sex education programs: you can talk about sexual health, as long as you don’t actually talk about sex. So, even when the Navy set out to educate a bunch of military recruits about how to take care of themselves, they had to turn syphillis into a cheap Bela Lugosi parody and gonorrhea into…. a tribble. As Palmer says:

The clip goes on to explain the history of syphilis, using awkward euphemisms like “camp follower” and “other types of conquests,” trippy 70s music, and animated rainbows to allude to sex. Then it tries to elucidate the physiology of veneral disease. Striving valiantly not to show any actual genitalia, the animators resorted to an Inner-Space like trip through a series of confusing pink tubes. Did you ever want to see an animated Tribble-like giggling gonorrea character stab the inside of the penis and the cervix with a mini pitchfork? Then this is the video for you!

Even if you never wanted to see any of that, you should take a look.