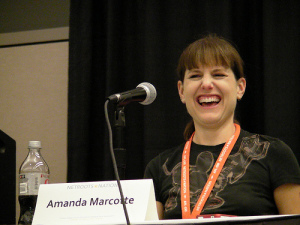 This might not be, as the caption implies, how all Americans view the world — I at least can hold out that much hope for my country — but it’s a pretty damn accurate portrait of how those who own the country see it.

(Pic found on Demonbaby.com, via the almighty Echidne.)

Godwin’s Law was invented in 1990, when college students had the internet to themselves and calling yourself a “geek” was a sure way not to get laid. It was a puckish way of commenting on the hyperinflation of passionate but pointless Usenet discussions to the point where one person would ultimately conflate disagreeing with their theory on whether or not George Lucas was a greater genius than Gene Roddenberry with systematically gassing, starving, and shooting millions of people. To be precise, it says:

As an online discussion grows longer, the probability of a comparison involving Nazis or Hitler approaches one.

Mike Godwin put his finger on a real truth of Internet dialogue, but ever since then, Godwin’s Law has become timeworn and impotent through overuse, mainly by ignoramuses who didn’t understand the original context of the comment, and more importantly, who had something they wanted to hide. Godwin’s Law has become a way for stupid people to shut down conversation about genuinely authoritarian policies or philosophies.In short, sometimes you just have to call someone a fascist — because they are.

Take this charming little piece, coming from a right-wing “think tank” called Family Security Matters, which is itself a front group for the Center for Security Policy. The title is “Conquering the Drawbacks of Democracy“.

When faced with the possible threat that the Iraqis might be amassing terrible weapons that could be used to slay millions of citizens of Western Civilization, President Bush took the only action prudence demanded and the electorate allowed: he conquered Iraq with an army.….

By elevating popular fancy over truth, Democracy is clearly an enemy of not just truth, but duty and justice, which makes it the worst form of government. President Bush must overcome not just the situation in Iraq, but democratic government….

If President Bush copied Julius Caesar byordering his army to empty Iraq of Arabs and repopulate the countrywith Americans, he would achieve immediate results: popularity with his military; enrichment of America by converting an Arabian Iraq into an American Iraq (therefore turning it from a liability to an asset); and boost American prestiege [sic] while terrifying American enemies.

He could then follow Caesar’s example and use his newfound popularity with the military to wield military power to become the first permanent president of America, and end the civil chaos caused by the continually squabbling Congress and the out-of-control Supreme Court.

President Bush can fail in his duty to himself, his country, and his God, by becoming “ex-president” Bush or he can become”President-for-Life” Bush: the conqueror of Iraq, who brings sense tothe Congress and sanity to the Supreme Court. Then who would be able to stop Bush from emulating Augustus Caesar and becoming ruler of the world? For only an America united under one ruler has the power to save humanity from the threat of a new Dark Age wrought by terrorists armed with nuclear weapons.

Reading the thing from beginning to end is even creepier, and FSM must have realized how bad it looked, because it’s no longer on their website, although it has been archived by Google and several bloggers. Atkinson is particularly crude in his contempt for democracy, but it’s been at the heart of the neo-con revolution from the beginning, from their militarization of the police to the desire to turn every piece of social infrastructure over to corporate hands.

For the last six years, anyone who spoke out against warrantless searches, expanding Executive and corporate power, torture, or blindly rushing into war has been painted as an un-American traitor either implicitly or explicitly. It’s the people who write and publish things like this who hate America and what it’s supposed to stand for.

(Essay found via A.C. Lipscomb at A Violently Executed Blog)

"Stick Magnetic Ribbons on Your SUV," by the Asylum Street Spankers.  (Thanks to Adam for spotting this.)