Originally published in Spectator, sometime in 2004. 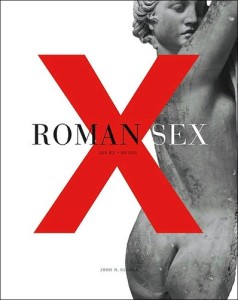 The sexlessness of classical studies not only preserves the portrait of the Romans as models of reason, philosophy, and civilization; it locks sex in the cultural basement, declaring that it’s practically irrelevant to the study of how a society grows and lives. You would think that instead of an urge intrinsic to the body, like eating or sleeping, it was a mere accessory, something that was grafted onto human beings almost accidentally.

Clarke and the art that he studies have one thing in common; each treats sex as a fact, a real and inevitable part of people’s lives. One of the great virtues of Roman Sex is that Clarke approaches his topic as neither a puritan nor a pornographer. He does appreciate the works as pornography, and never lets his ribald pleasure in their subjects disappear, but he also looks deeper than that first lusty glance.

One thing that’s immediately obvious from both the pictures and the text is that ancient Romans had a real thing for huge cocks. Inhumanly large, erect phalluses are spread from front to back, created in every medium that was available: bells and wind-chimes made of bronze, terra-cotta sculpture, paintings, mosaics, stone tiles, marble statuary, and anything else the artists of the day could shape, mold, or decorate. To anyone who’s been raised on the legend of John Holmes, or who goes through the daily ritual of deleting a hundred pieces of spam promising you a monster cock for the price of a few pills, this probably doesn’t seem noteworthy. I mean, who doesn’t like big cocks, right?

But the Roman fascination with big dicks is just the first and most obvious example of a recurring theme in Clarke’s book: how things that seem very familiar at first glance can be transformed into something very different – and vice versa – when seen through the eyes of another culture. This is the number one lesson of anthropology, but sex is rarely thought of in terms of anthropology. It’s too easy to figure that fucking is fucking is fucking and smut is smut is smut, wherever and whenever that might be.

For the Romans, a big cock wasn’t a sign of manliness or sexual skill. All of the Roman heroes – mythological, political, or athletic – were portrayed as having small, compact genitalia, almost like pubescent boys. What we consider “well-endowed” was considered a sign of a barbarian or a fool. The civilized man, having risen above his animal nature, had a small penis and testicles. Large penises and their admirers were seen as ridiculous and contemptible.

It was their ridiculousness that made them important, though. The huge phalluses that show up throughout Roman Sex were mostly used as good-luck charms. The key to this is the cock’s potential not just for fucking, but for laughter, which was believed to be a ward against evil. Thus, Roman filled their houses and cities with art such as a mosaic, laid outside a private bath, of an African slave with a giant penis dangling between his legs; a lamp in the shape of a hunchbacked dwarf, his dick so large that he can embrace it with his arms; a painting of the god Priapus guarding the entrance to a villa. All of these figures were typically objects of mockery for their unbeautiful forms. The dwarf, because both his body and his cock are distorted, was even more absurd and hence worth more luck in Roman culture.

But despite the prevailing belief among Romans that large cocks were ridiculous, some of the phallic artworks are undeniably beautiful. One prime example of the bronze bells (or tintinnabula) that Romans hung around their homes for luck is a boldly sculpted erection, arching proudly upward with wings sprouting from its back, while the bottom of the shaft merges into the haunches and tail of a lion. Another, smaller erection sprouts from its underside. At the very end of Roman Sex, Clarke says that he finally concluded that in the course of his studies, “it became clear that I could not look at their images of sex in art and literature with my twenty-first-century eyes…. [A]s liberated as I thought I was in sexual matters, I was blind to Roman concepts of sex.” And it may be that I am just as blind in trying to examine this particular piece, but I can’t see the mockery that Roman art is so well-known for when it comes to exaggerating the male organ. Instead, the sculpture seems to imbue the cock with a grace and beauty that is very rare in modern depictions. Even – and maybe especially – in porno, the male organ isn’t often shown as having much beauty or sensuality. The cock is too much about being the biggest, the hardest, and the longest-lasting. It’s not about who has the best body or the best orgasm; it’s about who has the best hardware.

Much of Roman Sex is about what the erotica left behind by the Romans tells us about their taboos, their aesthetics, sexual hierarchies, and where and when the line between official morality was crossed. But it is also as much about us as it is about the Romans.

Most of the art in the book comes from Pompeii and Herculaneum, the two Roman towns that were buried by volcanic mud and ash when the volcano Vesuvius exploded in 79 AD. They only began to be uncovered in the mid-18th century. What was uncovered was a crystal-clear picture of life in a Roman town during the 1st century. The most mundane details – stores, houses, streets, dinnerware, art, and even graffiti – were preserved, giving an unprecedented vision of everyday life in the ancient world. So complete was the preservation that although the bodies of the citizens had long since disintegrated, the volcanic ash that surrounded them created perfect molds of their dying positions.

Some people thought the remains of Pompeii and Herculaneum told a little too much about the lives of the Romans. Although you probably learned about Vesuvius around sixth or seventh grade from a history teacher or National Geographic special, what you probably didn’t learn at the time was that the two cities provided perhaps the most complete collection of ancient pornography ever found. More shocking to the sensibilities of the 18th-century excavators was how public much of the art was, with little attempt to segregate it from the eyes of either women or children. This was quickly corrected: in 1819, King Francis I of Naples visited the National Archaeological Museum and, scandalized by the explicit works that had been uncovered, ordered that they be immediately sealed away from public sight, to be viewed only by those “of mature age and respected morals.” The king’s edict was mostly obeyed for over 150 years; when Clarke first saw Pompeii’s famed House of the Vettii in 1968, no women were allowed to follow the tour group into the part of the house with the erotic paintings. Even today, the more explicit pieces are treated with a little embarrassment by the museum. Canadian columnist Robert Fulford wrote that when he visited the museum in 2000, the guide for his group “said he found the room [of items from the Pornographic Cabinet] disgusting and more or less advised us that we could see it at our own moral risk, without him.”

That embarrassment influenced how the remains of Pompeii were interpreted by the archaeologists and curators who became the official guardians of its legacy for two centuries. When Clarke visited the House of Vettii in 1968, the guard showed his group the famous portrait of the god Priapus weighing his cock on a scale, then explained: “‘You see, this was a bordello – how you say – a whorehouse.'”

So ingrained is the idea that there needs to be a clear boundary between the sexual realm and the public realm, that it seemed only natural that any building with sexually explicit art would be meant explicitly for sex. By 1986, 35 buildings in Pompeii had been categorized as brothels, or about 1 for every 75 men in Pompeii at the time of its destruction. But Clarke argues that once you analyze the context of the paintings, there’s little evidence that many of these buildings were brothels. They were, instead, restaurants, baths, and the everyday homes of citizens. He looks at the home of one middle-class banker, Caecilius Iucundus, who had a particularly nice picture of a couple making love mounted on the wall of his garden, where he might have met business associates. To have an explicit picture like this so publicly displayed was not an act of lower-class crudity as it might be seen in our society, but the exact opposite; it was an attempt by Caecilius to show that he was good enough to mingle with the rich and powerful by imitating their customs.

In 160 pages, Clarke covers an awful lot of ground in studying the Romans and their attitudes towards sex, much more than can be covered here. There is an amazing amount of variety both in the artistic forms and the acts portrayed, and he does an excellent job of contextualizing all of it so that his readers can see both how the Romans were like us, and how they were very, very different. Although male same-sex relationships were common and accepted, for instance, there were definite rules and taboos that governed them. It was not acceptable for a man to have sexual relationships with men of his own age and station, for example; always, the relationship was to have a clear-cut hierarchy between an older man penetrating a younger adolescent boy. As in many male cultures, to be penetrated was a surrender of your masculinity. Another taboo, perhaps even stronger than that, was the nearly absolute prohibition on oral sex. Being a very oral fellow myself, this is perhaps the one factor that makes me think I would have made a bad, bad Roman. The Romans, Clarke explains, had an obsession with oral purity that sprang from the importance of public speaking and debate. “To speak in the Senate was to use the mouth in the service of the Republic,” Clarke writes. “To accuse a senator of having used his sacrosanct mouth to perform a sexual act was tantamount to accusing him of betraying his public trust, sullying all of society.” Clarke uses this to put an interesting spin on certain modern political events: “Fellatio… made the fellator the guilty party. If the Clinton-Lewinsky scandal had erupted in ancient Rome, the only guilty party would have been Lewinsky.” This, too, isn’t an entirely alien concept; on the playground, in the locker room, and on the street, our culture too presents cocksucking as something that degrades the person performing it. Even homophobes look on gay tops with a little more respect than they do bottoms.