Today is Blog for Choice Day. It’s today not as some arbitrary decision, but because January 22 is the anniversary of Roe v. Wade. Today it’s 34 35 years since the Supreme Court first handed down one of their most momentous decisions, and stirred up a whole fucking hornet’s nest that’s lasted ever since then. It’s one of the most polarizing issues in American politics, and although it’s not generally acknowledged, abortion is one of the nexus points for America; it speaks not only to our attitudes about sex, but about class and race. The battles over public funding of abortion have little, if anything, to do with upper-class women. It is a battle that takes place very explicitly over the bodies of poor women. This is a simple equation: the more money you have, the more likely you are to be able to go to a private physician and quietly get an abortion without having to march past protesters in front of a free clinic. This isn’t a truth that’s only arisen in the last 35 years. The significance of Roe v. Wade isn’t that it made abortion legal; it’s that it gave poorer women the option that had always been available to wealthy women. It equalized the choice.

Theoretically, anyway. Thirty-four years on, the victory seems slightly hollow. At Sex in the Public Square, my partner Elizabeth Wood has put up a great piece looking at the reality: that while we technically have the right to legal abortions, in practice, we’ve slid backwards to de facto denial of that right:

This all sounds like good news, and it may be good news. Reducing the number of abortions as a result of reducing the number of unintended and unwanted pregnancies is certainly a good thing. But the report also indicates that the number of abortion providers continues to drop (though that drop has slowed). Taking the whole country into account, 87% of counties have no abortion providers, and what part of the country you live in matters a lot. If you’re in the northeast, where I am, you’re the luckiest. Only a bit more than half of counties have no providers (and we’re pretty densely populated, and counties are packed together, and transit options are not so terrible). If you live in the midwest, though, are among the least likely to have access. Ninety four percent of counties in the midwest have no abortion providers. Obviously that puts an enormous research and travel burden on the woman seeking an abortion. In the south 91% of counties have no provider and in the west 78% have none. (Table 3, p. 11)

The sad fact is that overturning Roe v. Wade is in many ways redundant for the actual goals of the anti-choice activists on the right: whether abortion is legal or not, lots of women and girls are regularly forced to carry their pregnancies to term simply by virtue of the ridiculous obstacles and hoops put in place by local and state legislatures which, while not formally outlawing abortion, make it both legally and psychologically difficult for women, especially if they’re teens without a partner or parent who supports them, to go through with it. 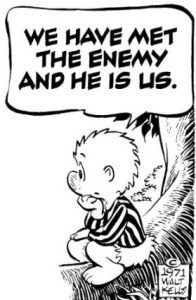 Pogo: We have met the enemy and he is us.

just the decreasing number of physicians who are willing to perform the operation. Paul Hill was executed in 2003 for gunning down a doctor and his bodyguard outside a clinic; in 1998, James Kopp shot and killed abortion provider Dr. Barnett Slepian in his own kitchen; and of course, Eric Rudolph is almost legendary for the bombing of several abortion clinics and one gay nightclub. All three were convicted but their acts, and others like them, have sent a clear message to doctors across the country: it’s dangerous to openly provide abortion services in this country. And in this area, at least, the terrorists have won. Anti-abortion violence is never acknowledged by politicians as they grandstand and make macho proclamations about “the Global War on Terror,” but it is the kind of terrorism that most directly affects our lives, even more so because it comes from within, because it is a result of our own fears about sex and about women. In the words of Pogo, “We have met the enemy — and he is us.” There is no more awful revelation to have to face, and those of us who are true patriots find ourselves having to face it often. The idea of the swarming, hostile hordes attacking us from outside, as frightening as it seems at first blush, is a myth that is meant to comfort us, like the sweet tales a parent tells a child to get them to settle down at bedtime.

The theme of this year’s Blog for Choice Day is supposed to address the question of “Why vote Pro-Choice?” But voting seems to me to be the very bare minimum that we can do. The problem with our democracy today is that we have reduced democracy down to its bare bones and let ourselves think that voting is enough. But the duties of a citizen in a democracy go beyond pulling a lever every two, four, six years. To be a citizen is so much more. It involves being educated, loud, and impolite. It means that you speak your mind and don’t let politicians get away with passing off bunkum as leadership. Roe v. Wade is the very bare minimum that’s acceptable to people who are really concerned about getting shame out of our sexuality, or about the idea that women have a right to be autonomous and safe in their own bodies, rather than chattel. 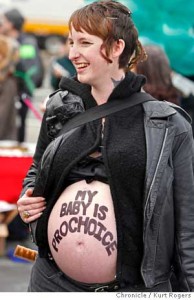 problems we’ve faced for the last twenty years is that even on the left, few seem willing to fully embrace the choice to terminate a pregnancy as a good thing that ennobles us as a society. It is something that, at best, the people who speak for us in the legislatures are willing to accept as a grim necessity. The issue is treated somewhat like Voltaire’s famous defense of free speech: “I disapprove of what you say, but I will defend to the death your right to say it.” And they make sure that the rest of us know that they do disapprove. This is one of the reasons that I can’t embrace Hillary Clinton a presidential candidate: her position towards abortion is that it should be “safe, legal and rare.” And while I can easily embrace the first two, the third implies a certain moralism. It’s explicitly designed to allow Hillary to stand at arm’s length from the icky realities of sex and abortion and look down a little on the poor souls who have abortions.

We have to demand more than this. We need for women to be able to say that they’ve had abortions without being either pitied or condemned, and for us men, we need to be willing to stand beside them and realize that we’re not diminished by the choice. Sometimes, it is the right thing to do.

Getting Roe v. Wade was a great step forward in human dignity and shedding our old attitudes towards sexuality. But we need to stop merely defending it and say that we need much more, much more, than squeamish acceptance of sexuality and that a right that is merely a formality for millions of women is as bad as if it didn’t exist at all.