Being as I write for a dog blog and actually get paid for it, I hope it doesn’t make me a bad person that part of me wishes that this headline were actually real. More to the point, I hope that I don’t wind up unemployed. Or more unemployed than I already am. I love dogs, really, but the small, yappy ones sometimes make me want to use them for practice on a trebuchet. 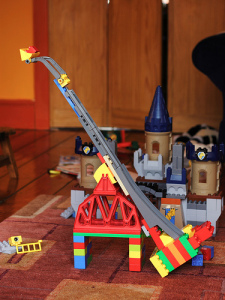 When you make your trebuchet out of Lego bricks, it’s even better. [media-credit]By: Paul Albertella[/media-credit]

SASKATOON – While bans on pitbulls are increasingly common, Saskatoon has become the first city in the world to ban dogs under 5 pounds (2.27 kg) because they are “noisy, annoying and not really dogs.”

In a split-vote decision, City Council passed the by-law to shut the city gates to a long list of dogs that are commonly referred to as “Purse Dogs” because they fit in a handbag, or “Dinky Doo Doo Doggies” because their pooies are the size of Raisinettes.