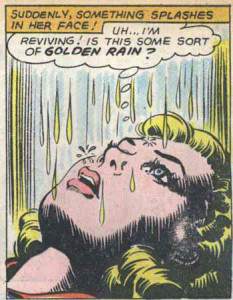 Pretty much anyone who’s a serious comics fan has read Alan Moore’s Top Ten, which takes the themes that Wertham first spotted and expands on them in a very gritty, realistic narrative. This old World’s Finest cover shows how fond those old superheros were of their sidekicks. 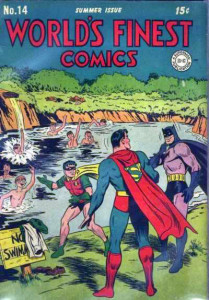 Once again, Ronald Reagan comes to the rescue. Somehow, Ethan Persoff found this fine example of Reagan-era propaganda: a comic book, titled “Grenada: Rescued from Rape and Slavery,” which was produced by the CIA and distributed during the 1984 invasion by American troops. Reagan has a much more distant role in this one than in the Reagan’s Raiders books, but his presence is just as inescapable; the fantasy of the White Man’s Burden should also feel chillingly familiar to everyone who’s watched Bush and his minions prance about for the last five years.

In which Superboy is bad, and both he and Pa Kent become equally frustrated. END_OF_DOCUMENT_TOKEN_TO_BE_REPLACED

Superman has never had a steady sidekick (unless you count Krypto… hmm) but never let it be said that he isn’t willing to comfort a young man in distress: 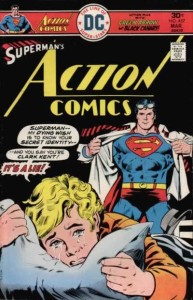 In 1954, a psychologist named Frederic Wertham published the most influential book ever written about comics: Seduction of the Innocent, a polemic that decried comics as a moral evil that caused everything from juvenile delinquency to sexual perversion. The result of Wertham’s book was a series of congressional hearings and finally the creation of the Comics Code Authority, the comic-book equivalent of the Motion Picture Production Code. END_OF_DOCUMENT_TOKEN_TO_BE_REPLACED