I seem to have missed this during the eighties, and boy am I glad. Back then, I wasn’t the healthy, well-adjusted fellow I am today. It looks to be at least as bad, if not worse, than the execrable Liberality for All, which stars Sean Hannity, G. Gordon Liddy, and Rush Limbaugh as superheroes fighting the evil goons commanded by President Chelsea Clinton. Although Hannity and crew are more naked in their love of authoritarianism than Reagan ever was, Reagan was a cartoon character from the beginning. That was his charm from the beginning; he painted the entire world in bright, four-color panels, and let Americans see themselves as the Justice League setting out to defeat Darkseid. The ineptness with which George W. has tried to weave the same narrative around Iraq just shows what a snow job it was from the beginning. Reagan, more than any other politician, did a dance just on the edge of self-parody with his B-movie metaphors and grandfatherly charm. Putting him into four-color panels leaves behind nothing but the ridiculousness.

Most interesting to me is the splash panel at the bottom, which portrays Stallone and Schwarzenegger in positions that, like Mel Gibson’s Christian snuff flick, in poses that combine Christlike sacrifice, homoeroticism, and sadomasochism.

“For God so loved the world that he sent Sylvester, Arnold, and the Gipper…” 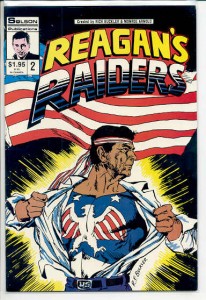