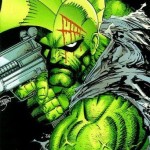 So–as it turns out–I went to high school with Glenn Beck. I could have killed him with a shovel before his rose to power. I’m so sorry.

Hell, I don’t think it was even necessary for you to kill him with a shovel, Erik. Just you know, you could have hung out with him and made sure he stayed on his meds, or read stuff that would have given him a more solid grounding in reality than the conspiracy theories he spews on a daily basis. Reading Lee and Kirby’s Fantastic Four would have been a comparatively strong start. Their grasp of science looks downright Nobel-quality compared to Beck’s theories that a worldwide cabal evil scientists are faking global warming. When even Victor Von Doom thinks you’re batshit, you’ve gone pretty far over the edge.